The Sackville All Star Christmas Record is a timeless record, comprised of a wonderful mix of traditional carols going back to the 1500s (“Silent Night”, “Good King Wencelas” and “We Three Kings”), songs without religious connotation but still emblematic of the christmas season (“Rudolph the Red Nosed Reindeer”, “White Christmas”), contemporary songs popularized as recently as the middle of 20th century (“Winter Wonderland”, “Santa Claus is Coming to Town”), and jazz songs with any kind of Christmas references (“At the Christmas Ball” popularized first by Bessie Smith).  At the time of it’s release this album sold very well, quickly finding its way as a Christmas favorite, and still retains popularity due to its classic charm, beautiful and balanced instrumentation executed by a stand out group of jazz musicians.

This album features Jim Galloway on soprano sax, Milt Hinton on bass, Gus Johnson on drums, and Ralph Sutton on piano. Jim Galloway, a Canada based Scotsman, is known for his jazz clarinet and saxophone playing, and his album “Walking on Air” stands out for its critical acclaim and nomination for Best Jazz Album in 1980. Milt ‘The Judge’ Hinton is perhaps the most well-known of the group, he played violin, bass horn, tuba, cello but is known for the thousands of records he did playing the bass violin. He is one of the most recorded musicians in 20th Century jazz, performed live around the world and was awarded honorary doctorates from 9 different universities, he was also a prolific photographer, and his 60 year-long documentation of the jazz scene has been important for understanding and writing about that period. Gus Johnson played drums in a huge number of bands, performing live starting at the age of ten, known and loved for his versatility, he continued to perform and record with others into his 70’s. Ralph Sutton was superb piano player, playing stride with a number of bands, he was briefly part of the World’s Greatest Jazz Band. Fellow jazz pianist Jess Stacy said “He’s one of the few piano players who uses both hands, and it’s sure nice to know that a player like Ralph is still around.”

With such a great mix of songs and artists, it’s no wonder this album is known as “the Christmas record for all seasons”; you’ll still want to play it after the Christmas tree is packed away,  Santa has left town and snow has long-since melted. 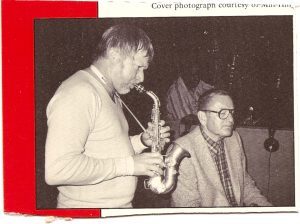