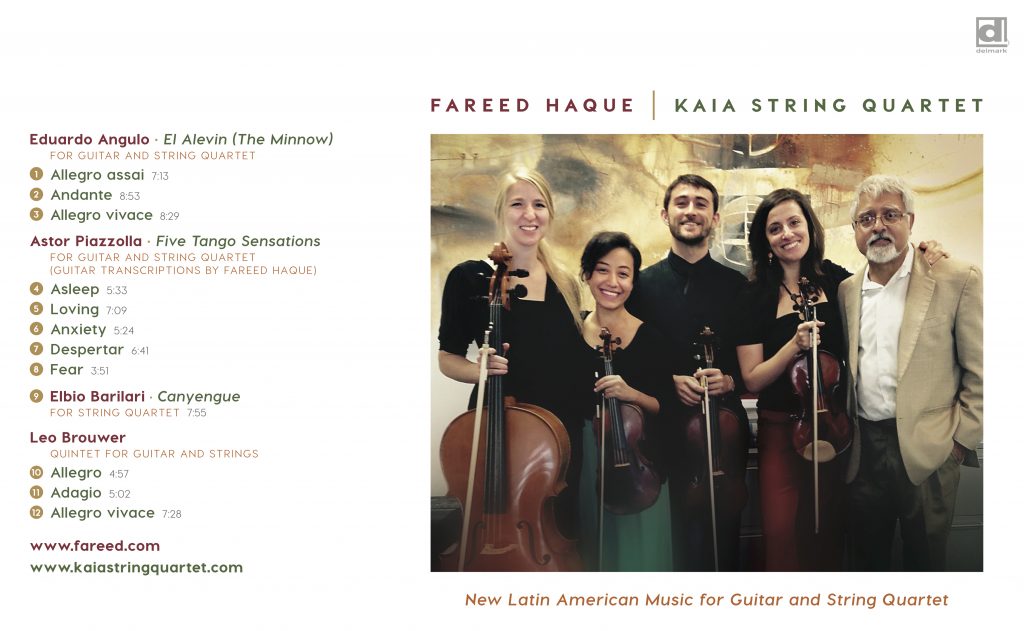 In NEW LATIN AMERICAN MUSIC FOR GUITAR AND STRING QUARTET, Haque and the Kaia String Quartet shine together in a variety of pieces by Latin American masters ranging from Piazzolla to Eduardo Angulo to Leo Brouwer drawing influence from the Caribbean and Mexico to the Río de la Plata. The collaboration offers a new flavor to jazz, Latino, and chamber music. Haque’s formidable experience in those fields in combination with Kaia’s luxurious sound and devotion to Latin American music blossom together in one of the unmistakable albums of the year.

Fareed Haque and KAIA String Quartet will be performing at Old Town School of Folk Music’s Gary and Laura Maurer Concert Hall in Chicago on Wednesday, October 24 as part of the Chicago Latino Music Festival. This concert will also serve as the album’s release celebration.

Fareed Haque is a modern guitar virtuoso. Steeped in classical and jazz traditions, his unique command of the guitar and different musical styles inspire his musical ventures with tradition and fearless innovation.

Born in 1963 to a Pakistani father and Chilean mother, Haque’s extensive travels and especially long stays in Spain, France, Iran, Pakistan, and Chile exposed Haque to different music from a very early age. While this natural eclecticism has become a hallmark of Haque’s music, it was repeated visits to Von Freeman’s Chicago jam sessions that gave Haque a grounding in the Chicago blues and jazz traditions. Haque’s long history includes working or recording with Paquito D’Rivera, Sting, the Blue Note label, Joe Henderson, Joe Zawinul and many others.

In 2001, Haque’s interest in the jam scene led him to co-found Garaj Mahal. This began 10 years of extensive touring across the U.S., performing more than 200 shows per year. Garaj Mahal released three live CDs as well as five studio albums. In 2009, Haque was voted ‘Best World Guitarist’ by Guitar Player Magazine’s Readers’ poll. His acclaimed 2009 release Flat Planet reached #1 on the World Jazz Radio charts. After 10 years of playing over 2,000 dates with Garaj Mahal, Haque’s interest in electronic music and the Moog Guitar spurred him to leave Garaj Mahal and form Fareed Haque’s MathGames. Recently, Haque has returned to his first loves: jazz guitar and classical guitar. He been busy performing and recording with his trio and jazz quartet, as well as his larger world music group the Flat Earth Ensemble. Haque has also joined drum legend Billy Cobham as a member of his Crosswinds Ensemble.

KAIA String Quartet is a Chicago-based ensemble devoted to capturing the essence of Latin American culture through the medium of the string quartet. KAIA recently completed their residency with WFMT Chicago’s classical and arts radio station where they performed, curated, and exposed audiences to new ways of thinking about Latin American music.