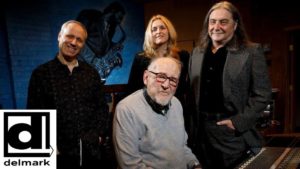 Chicago musicians/composers/entrepreneurs Julia A. Miller and Elbio Barilari are taking over the business.  Miller is  the incoming President and CEO, and Barilari is the new Vice President and Artistic Director. Steve Wagner will continue working at Delmark as Label & Studio Manager.

“Owning a record label and recording studio has been a dream of mine for 25 years,” says Julia Miller who will serve as President and CEO of Delmark Records. “At the Art Institute, in my Song class, I always begin with spoken blues. Blues is a living history; Delmark embodies a living history of the Blues in Chicago, and for the world.”

Elbio Barilari, who will serve as Vice President and Artistic Director, adds, “This is a very exciting opportunity both artistically and from a business perspective. Personally, it also offers me the chance to give back to Chicago’s musical community for the generous support I have been given during the 20 years I have been living here.”