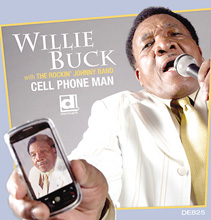 Willie Buck’s career as a blues singer began slowly after he arrived in the “Windy City,” Chicago, in the 1950s. He quickly got into the circles by exploring, through a relative, Muddy Waters at his standard gig venue, the renowned Sylvio’s Club in West Side. Muddy Waters is a name to which he has often been stylistically compared, but Willie has created his own career and song respecting traditions.

– Admission is $25 at the door if available.

– Doors open at 8 PM. Guests must arrive between 8 PM and 9 PM for the 1st set. Guests arriving after 9 PM are guaranteed entrance, but seating will be based on availability.

– Seating is available on a first-come, first-serve basis at tables and the bar. Tables are shared.

– Rosa’s Lounge may reserve tables for groups of 4 or more.

– Holding seats for late arrivals or no-shows is not allowed. Rosa’s Lounge reserves the right to seat people in unoccupied seats after 9 PM.

– Guests are welcome to stay for the 2nd set.

– ALL SALES ARE FINAL. NO REFUND.

Willie Buck has been leading his own bands for over 40 years. He’s been on the scene since his arrival in Chicago as a teenager in the midst of the heyday of Chicago blues in 1953. He put out his only album in the early 80s which became a collector’s item over the years and was re-issued in 2010 as The Life I Love (Delmark 805). At that time it was decided Willie would create a new album for Delmark but it wasn’t until Rockin’ Johnny stepped forward that the project got off the ground. Cell Phone Man features 16 songs with a heavy dose of Muddy Waters Chicago Blues. Rockin’ Johnny Band is Rockin’ Johnny, Rick Kreher, guitar; Barrelhouse Chuck, piano; John Sefner, bass; Steve Bass, drums and special guest Bharath Rajakumar, harmonica.