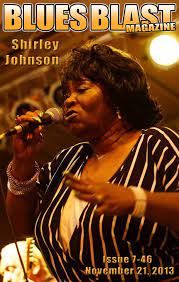 Nicknamed the “Sweetheart of the Blues” by the staff at BLUE CHICAGO, Shirley has been gracing the stage here since the 1990s with her spectacular performances.

Like so many African-American vocalists, Shirley Johnson started out singing in church and then went on to embrace secular music. The Chicago resident, whose influences range from Mahalia Jackson to Koko Taylor, Etta James, and Ruth Brown, is a gritty, big-voiced blues singer who can also handle soul and gospel. Although Johnson has spent much of her adult life in Chicago, the Windy City is not her hometown;  she was born in Franklin, VA and raised in Norfolk, VA. Shirley came from a very religious family and  was only six when she started singing gospel in a church choir.

When Shirley reached adulthood in the late ’70s, she pursued a career in secular music and made her presence felt in Norfolk’s blues and R&B circles. She went on to become an opening act for Aretha Franklin, Jerry Butler, Z.Z. Hill, and other well-known artists who were passing through town. In the early ’80s, she recorded some singles for two regional labels in Virginia and those recordings caught the attention of a man who was planning to start a label in Chicago. The aspiring record man expressed interest in recording Ms. Johnson and sent her a plane ticket to Chicago, but when she arrived in the Windy City she learned he didn’t have enough money to pay for a session.

Nonetheless, she decided to remain in Chicago and became active on the city’s blues circuit, where she has performed both Blues and Soul. The musicians she worked with in Chicago included Little Johnny Christian, Artie “Blues Boy” White, and keyboardist “Professor” Eddie Lusk (who was a staple at BLUE CHICAGO and took Johnson on the road with him on international tours.)

Since  the ’90s, Johnson has made many recordings and in 2000 is one of the vocalists recorded on BLUE CHICAGO’s CD entitled “Mojo Mamas.”