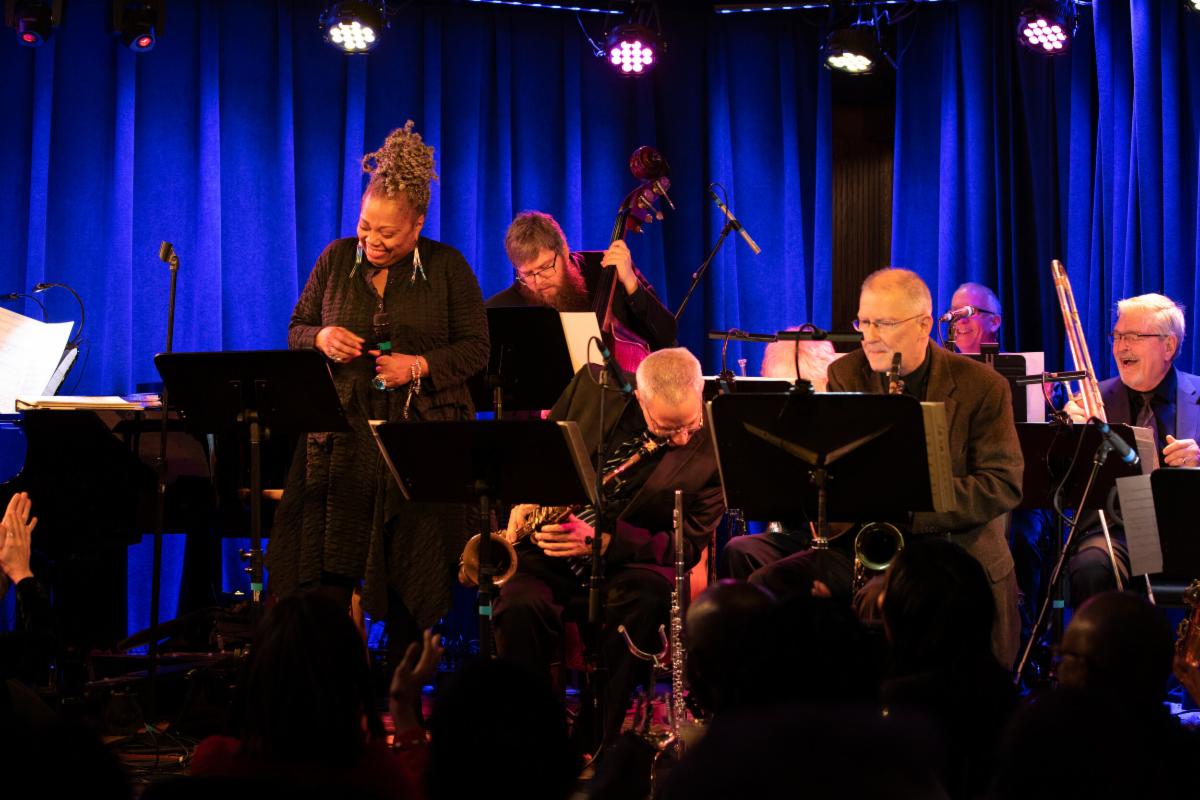 You won’t need to get very far into this disc – about 75 seconds, I’d say – to know why the Metropolitan Jazz Octet and Dee Alexander seem made for each other. After the rarely heard verse to “Ain’t Nobody’s Business,” Jim Gailloreto’s arrangement swirls the horns together into a bebop Dixieland of collective improvisation; and yet, each one emerges with high-def clarity. And so does Alexander when she re-enters; she becomes another instrument in the mix.

It’s Too Hot For Words is a multi-generational time capsule: sterling musicians of the 21st Century, building upon an octet sound crafted 60 years earlier, to revitalize songs that Holiday began recording in the 1930s. It also serves as a springboard for the one aspect of Holiday’s work that Alexander does mimic. Sutter puts it this way: “Dee does what 90 percent of singers don’t do: instead of just singing the song, she tells a story – like Billie.” And all the while, the MJO spins evocative stories of their own: wordless but equally literate narratives to complement the human instrument invited into their midst.

MJO is the reawakening of a jazz group originally started in 1950’s and has a rich history and legacy in tradition and modern jazz. The arrangements and performances are described as a ‘big-small band’ and a ‘small-big band’ that creates a chamber jazz sound offering something new for the modern jazz audience. We are thrilled to collaborate with Chicago’s treasured jazz vocalist Dee Alexander, together we perform music from our Delmark Records album “It’s Too Hot for Words” a reimagining of classic songs from the great Billie Holiday.

MJO appeared at the Hyde Park Jazz Festival (2021), and were voted Best Jazz Album by the Chicago Tribune (2019). We played to sold-out audiences at The Green Mill, Studio 5, Hey Nonny and the Jazz Showcase; and also received great reviews from Jazz Times, Downbeat and Chicago Jazz Magazine.

People love Dee and Billie Holiday’s music continues to resonate with a wide audience. This project has created some deep and meaningful interest and the timing is right to plan an appearance.

Dee Alexander is one of Chicago’s most gifted and respected female vocalist/songwriters.

Her talents span every music genre, from Gospel to R&B, from Blues to Neo-Soul. Yet her true heart and soul are experienced in their purest form through her performance of Jazz music. From a soft, sultry traditional ballad, to a contemporary Jazz-Funk groove; from a high flying swing, to a scat-filled romp, Dee Alexander delivers each style with a passion and love of music that comes across in each and every note, and with a style and grace that is truly her own. Besides being a phenomenal headliner in her own right, Dee has shared the stage with Ahmad Jamal, David Sanborn, Earl Klugh, Gerald Albright, Roy Ayers, Joshua Redman, and the O’Jays. Not being one to ever feel that the spotlight has to belong exclusively to her, Ms. Alexander has lent her considerable talents as a backup vocalist to the live performances of an array of many other well known artists i.e., Michael Bolton, Phil Perry, Willie Clayton, and Zora Young. Dee has also formed the Evolution Ensemble which is an acoustic group that consists of string instruments and percussion with a strong emphasis on original compositions.