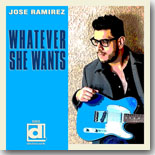 The José Ramirez Band will bring their steamy and passionate brand of the blues to WBTT for one night only. A 2021 Blues Music Awards nominee for Best Emerging Artist Album, José earned second place in the 2020 International Blues Challenge in Memphis after advancing to the semi-finals against over 230 bands from around the world. He has played at legendary venues around the world, including Buddy Guy’s Legends in Chicago, where Buddy Guy himself joined him on stage. José’s appearance at WBTT will be one of his last U.S. stops before launching his third European tour. He is a Delmark recording artist—the first Latin American to sign with the renowned Chicago-based blues label.

Click Here to see a video of the José Ramirez performing “Here I Come” live at The Hamilton in Washington, DC

Click Here to see a video about the making of the band’s album, “Here I Come.” José talks about his take on the blues, heavily influenced by soul and R&B