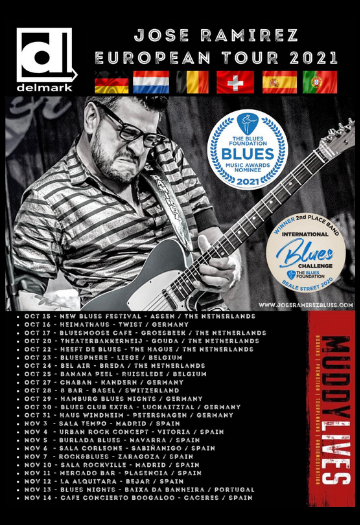 On November 13th, from 9:30 pm, the José Manuel Figueiredo Cultural Forum, in Baixa da Bath, receives another Blues Night By BBBF. Tonight, José Ramirez, currently one of the most popular  Latin American bluesman , takes to the stage,  who makes his absolute debut in Portugal on this Blues Night, in a concert as part of his  European tour  .

At 33 years old, José Ramirez has already worked with big names in the  blues such  as Buddy Guy, Anson Funderburgh, Janiva Magness, Mark Hummel and Bryan Lee, among others. With a recent contract with the famous Delmark Records, from Chicago, he is preparing the release of his second album.

He was recently nominated at the Blues Music Awards for his debut album “Here I Come”, produced by guitar legend Anson Funderburgh.

It also won second place at the International Blues Challenge, in Memphis, in 2020, organized by the Blues Foundation.

Organization: Associação BB Blues Portugal, in partnership with the Municipality of Moita and the Union of Parishes of Baixa da Bath and Vale da Amoreira

Ticket Opening Hours
Tuesday to Saturday from 2:30 pm to 7:30 pm Show
days: One hour before the start of the show or session; it closes when the show or session starts.
Tickets can also be reserved, by calling 210 888 900, during the ticket office’s opening hours. Reservations must be collected, at most, the day before the show/session, with a limit of five tickets per reservation.

And at participating points of sale:  http://ticketline.sapo.pt/pagina/postosdevenda