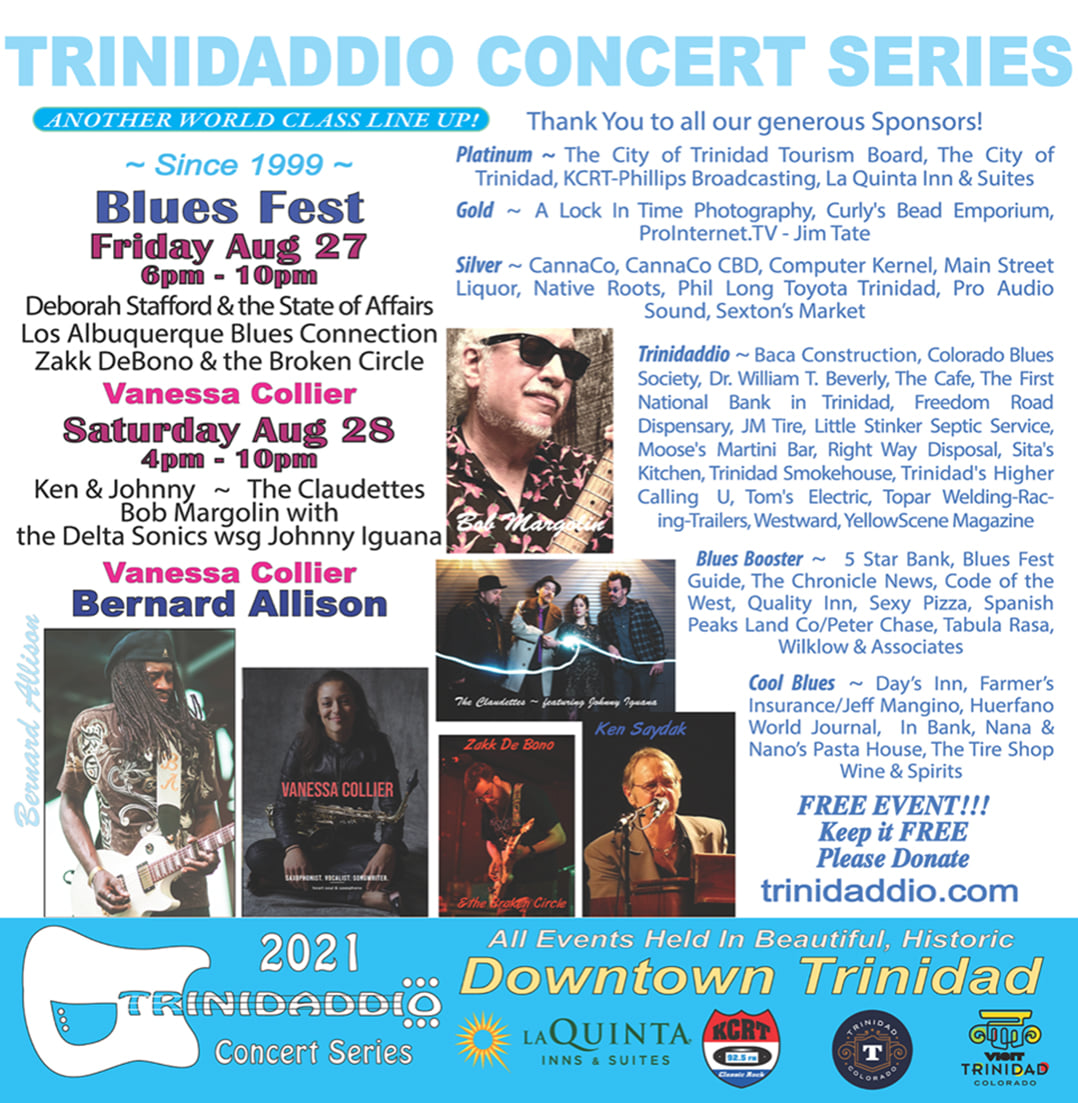 KEN SAYDAK, a native of Chicago, Illinois, has enjoyed a fifty-year career as a musician, writer, vocalist, and producer. He currently hosts a two-hour weekly blues radio program, The Trinidaddio Blues Hours on
KCRT-FM, a commercial station near his home in southern Colorado.

2018 saw the release of a long awaited project, The Rockwell Avenue Blues Band, Back To Chicago, featuring Ken along with lifelong friends and collaborators Steve Freund, Tad Robinson, Harlan Terson, and Marty Binder in a collection of original songs. The rave reviews of this Delmark Records release by a stellar group of Chicago veterans resulted in the band’s appearance at the 2018 Chicago Blues Festival (where Ken also performed solo on the mainstage in a tribute to Delmark’s legendary catalog of renowned blues artists). The band also appeared at the 2019 Trinidaddio Blues Festival.

Ken is the pianist, organist, and accordionist on over seventy albums by national and international artists. His 2015 release, Live In La Veta Vol. 2 (SnailWorx), and 2013’s  Live In La Veta Vol. 1 follow his other solo-career recordings, It’s My Soul (Evidence Records) in 2005 and two discs on the Delmark label, Love Without Trust (2001) and his solo debut, Foolish Man (1999). All of his recordings showcase his instantly recognizable vocals and piano style, as well as his insightful, engaging, and often humorous songwriting.

Here’s what the critics have said:

“…Then there is Ken Saydak. It is his songwriting and singing that make him sound like a barroom bard, street sage and soapbox preacher all rolled into one cat disguised as a gifted pianist and organist…”
David Mac – Blues Junction Productions

“Though veteran session man and Big Shoulders bandleader Ken Saydak has left Chicago, his commitment to America’s greatest music remains unabated. On It’s My Soul, the singer-songwriter-keyboardist bolsters the canons of blues and roots music with a dozen compelling new songs, delivered with gruffly good-natured vocals and towering piano and organ performances….It’s My Soul is an excellent listen.”
Blues Revue Magazine

“It’s My Soul…reaches back through labels and categories to clutch the still-pumping heart of the simple and glorious music that became rock ‘n’ roll – the seminal, simmering soul stew bursting with different but related flavors: the twangs of country music, the tangs of New Orleans R&B, the heart pangs of gospel, and the ka-bang! of the blues…
All About Jazz

“With a rock-solid left hand pumping out the rhythms and a right hand that lightly caresses the keys one moment and pounds them into boogie-woogie submission the next, he demonstrates why the piano has retained a prominent spot in the blues world despite the glut of guitar slingers.”
Blues Revue Magazine

“Our man is a true blues pianist all around, at the same time soft and deep, a worthy heir to Otis Spann, a champion of an instrument which has lost its prestige. In addition, he’s a sensitive composer, occasionally autobiographical, absolutely gifted for socio-economic or philosophical vignettes about daily life and human relationships.”
Soul Bag Magazine, Paris

Johnny Iguana grew up in Philadelphia, where he studied piano from age eight and played piano and organ in blues bands from age 16. He moved to New York City at age 22, where he met one of his greatest musical heroes, Junior Wells. He was hired by Junior after auditioning live at the Boston House of Blues, and moved to Chicago in February 1994. He toured with the Junior Wells Band for three years, toured with Otis Rush and recorded with Carey (and Lurrie) Bell, Lil’ Ed and more.

All along, Johnny has also had his own decidedly non-blues rock bands, sometimes playing his distinctively grimy overdriven organ. First came Stevie Lizard & His All-Reptile Orchestra (late ’90s). Then came the nationwide cult favorite oh my god (see discography and press quotes). His band Them vs. Them, formed with JQ of the Q Brothers, recorded and performed after that. The synth-fueled Software Giant came next.

Since late 2010, Johnny has been recording and touring with his “garage cabaret” band the Claudettes. who started as a piano-drums instrumental duo with Michael Caskey and have now released three recordings as a four-piece with Berit Ulseth singing and Zach Verdoorn singing and playing bass and Bass VI. For their first four records, go to their Yellow Dog Records page. For their latest, visit Forty Below Records. On his blues tours and his tours with the Claudettes and oh my god, Johnny has played all over Europe, North and South America, Australia and New Zealand, Indonesia, all across Japan and in the Middle East.

A short list of Johnny’s major musical inspirations: Otis Spann, Jay McShann, Ray Charles, Mose Allison, Bobby Timmons, Mike Watt, Bob Mould, Joe Strummer, Captain Beefheart and the near, dear, late, great Junior Wells. Johnny is a proud carrier of tradition (including the Chicago blues that uprooted him from his East Coast home and planted him firmly in the Windy City) but is even more proud to have developed abusive organ tones and a highly rhythmic, very “in-the-moment” piano style that sounds like no one else.