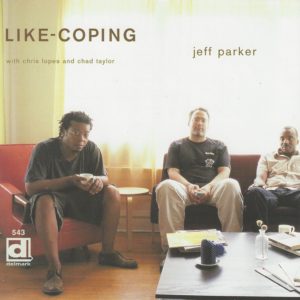 Jeff Parker is recognized as one of contemporary music’s most versatile and innovative electric guitarists and composers. With a prolific output characterized by musical ideas of angularity and logic, he works in a wide variety of mediums—from pop, rock, and jazz to new music—using ideas informed by innovations and trends in both popular and experimental forms. He creates works that explore and exploit the contrary relationships between tradition and technology, improvisation and composition, and the familiar and the abstract. His sonic palette may employ techniques from sample-based technologies, analog and digital synthesis, and conventional and extended techniques from over 40 years of playing the guitar.

Called “one of the most formidable solo talents in modern jazz” by London’s Observer, Parker has released several albums as a leader. His latest, a solo album called Suite for Max Brown (2020), debuted at Number 1 on the Billboard Jazz Chart and was included on numerous year-end “Best of” lists, including those from WIRE Magazine, MAGNET Magazine, and The Guardian.

Augustana Lutheran Church has been a space for nurturing diverse community in the Hyde Park neighborhood for nearly 30 years.

There are no food or beverage services at this location.

Restrooms are available inside the church.

Masks are required for entry.

Jeff Parker has been part of some of the most exciting groups in Chicago including the Chicago Underground, Tortoise, Isotope 217, and Ernest Dawkins’ New Horizons Ensemble. His first solo release, Like-Coping may be sorely overdo, but it was well worth the wait. Fans of any of the aforementioned groups should relish the chance to hear Parker in this intimate setting. The record is full of the melodic compositions, uncanny phrasing, and chordal mastery which have become the hallmarks of Jeff’s sound. Bassist Chris Lopes and drummer Chad Taylor, last heard together on the Chicago Underground’s Playground (Delmark 503), round out this intuitive and versatile trio. Recorded and mixed by John McEntire.