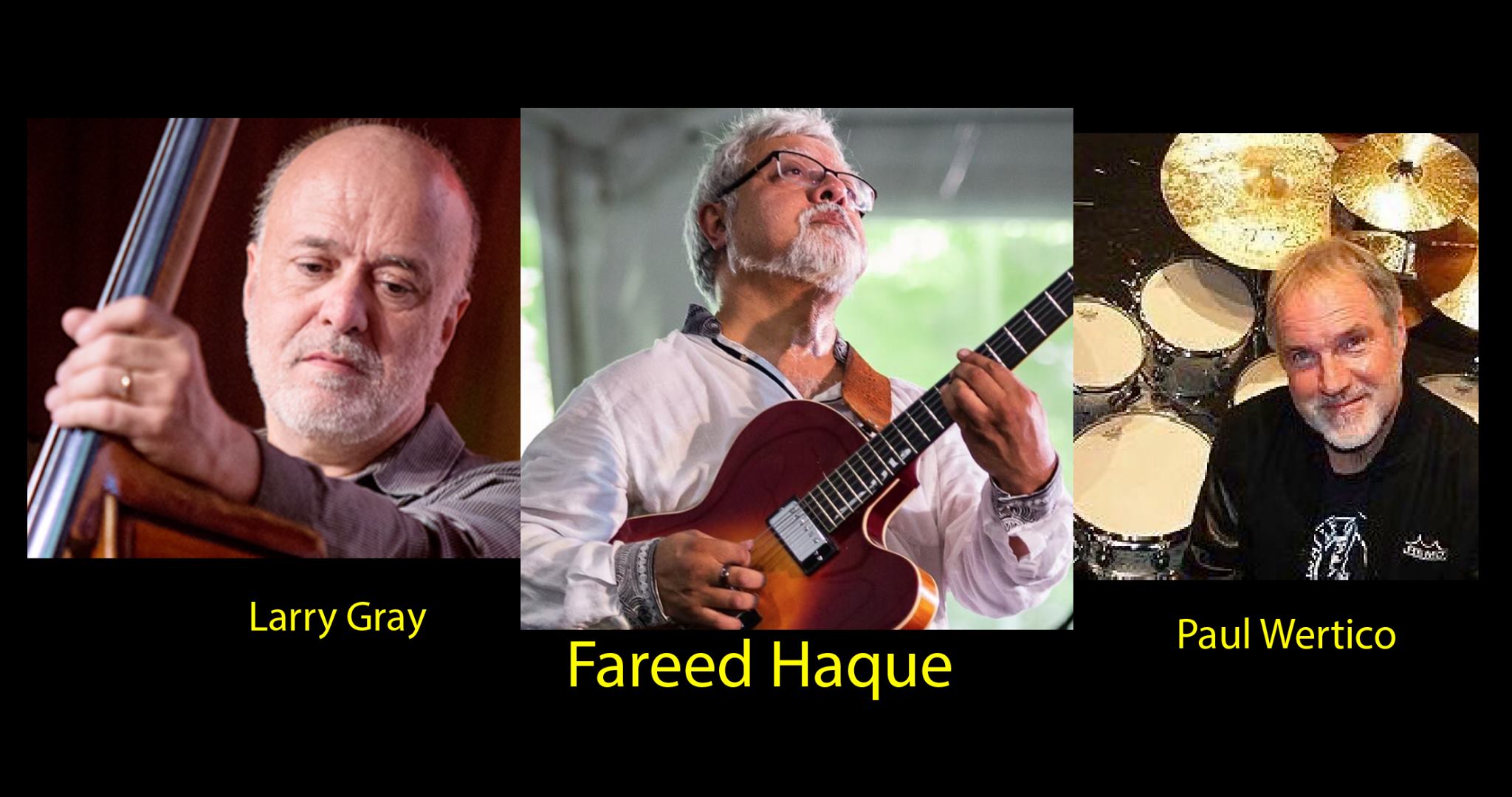 Wertico-Haque-Gray represents both a return to roots and the natural evolution of Haque’s musical voice.

Featuring Haque on new hybrid nylon string classical guitars, Haque expands the tonal and contrapuntal possibilities of the guitar trio from the mystical to the mathematical, from the visceral to the virtuosic.

The Incredible colors and percussive mastery of Paul Wertico and magical virtuosity of bassist/cellist multi-instrumentalist Larry Gray open the doors to a new rich sound in the guitar trio format.

We invite you to open your hearts and minds to a new music neither jazz nor classical, not mind or body, but pure spirit.

A modern guitar virtuoso, Fareed Haque, is steeped in classical and jazz traditions. His unique command of the guitar and different musical styles inspire his musical ventures with tradition and fearless innovation.

Fareed’s been busy performing and recording with his trio featuring legendary B3 virtuoso, Tony Monaco, his own trio and jazz quartet, as well as his larger world music group, the Flat Earth Ensemble.

Haque’s most recent release, “New Latin American Music for Guitar and String Quartet,” was picked by Howard Reich of the Chicago Tribune as one of the top releases of 2018. In addition, the release was chosen as Downbeat Magazine Editor’s Pick in 2018.

Fareed2019 was a busy year, as Haque retired from 30 years at Northern Illinois University to accommodate extended tours with Cobham, Goran Ivanovic, and his own groups. Highlights included The Montreux Jazz Festival with Cobham, and appearances with his own groups at The Bluenote Beijing, Louisville, and Minneapolis Guitar Festivals, among others. New recordings with his own group and with Goran Ivanovic are scheduled to release soon under the legendary Delmark Label.

Haque continues to record and tour extensively along with documenting his unique teaching methods in a series of best-selling interactive video courses through TrueFire.
www.fareed.com/home

Paul Wertico is hailed in the press as “One of the most versatile and musical drummers in music today”, Paul Wertico was born January 5, 1953 in Chicago. He gained worldwide recognition as a member of the Pat Metheny Group from 1983 to 2001. During his tenure with Metheny, Wertico played on ten recordings and four videos, appeared on numerous television shows, and frequently toured around the world. He also won seven Grammy Awards (for “Best Jazz Fusion Performance,” “Best Contemporary Jazz Performance,” and “Best Rock Instrumental Performance”), magazine polls, and received several gold records. Wertico is also an Associate Professor of Jazz at Chicago College of Performing Arts: Jazz & Contemporary Music Studies.
www.paulwertico.com/

Bassist, multi-instrumentalist, and composer, Larry Gray has enjoyed a career spanning some four decades in which he has collaborated with a long list of many of the world’s most important jazz artists, including Jack DeJohnette, Bobby Hutcherson, Joe Williams, McCoy Tyner, Benny Golson, James Moody, Sonny Stitt, Larry Coryell, Kenny Burrell, Joe Pass, Clark Terry, J.J. Johnson, Steve Turre, George Coleman, Lee Konitz, Benny Green, Eddie “Lockjaw” Davis, and Gary Bartz, among many others. He has five solo recordings to his credit, beginning with Solo + Quartet and most recently, Three Equals One. Among many projects as a collaborator or sideman, he appeared on five CDs during his twelve years as a member of the Ramsey Lewis Trio. Through the years, he toured with many artists, including Joe Williams, Clark Terry, Frank Wess, James Moody, Marian McPartland, and Ramsey Lewis, appearing at many important festivals and concert venues worldwide.

Do I need to print my ticket?
Due to different systems, some people might not get the second email of tickets with QR codes. You can either print your email receipts or simply show them on your phone upon arrival.