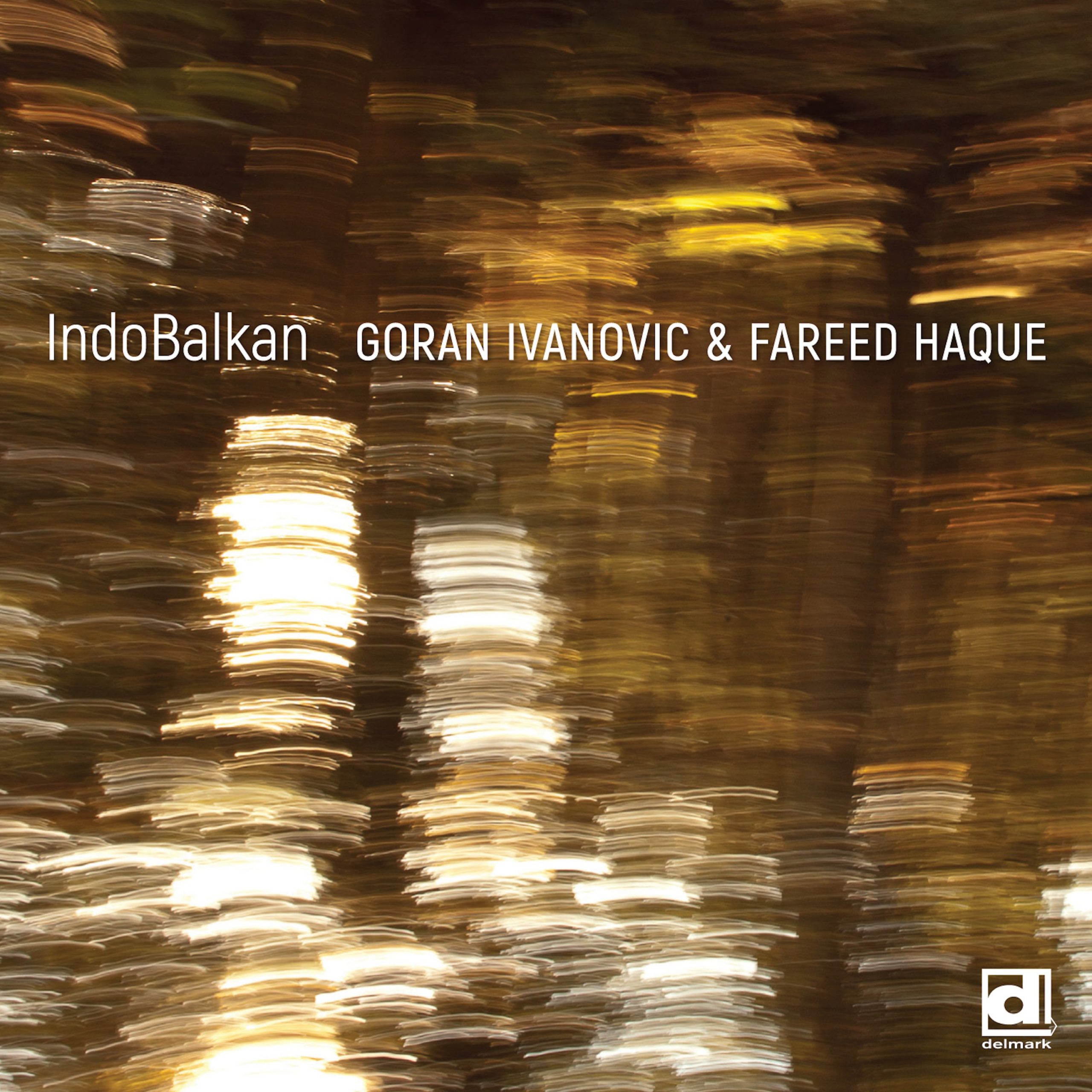 Fareed & Goran will open for Oz Noy with Dennis Chambers and Jimmy Haslip.

Inspired by the rhythms and melodies of flamenco, jazz, classical, rock and the Balkan region, this performance features the unrivaled guitar artistry of two of the finest players of their respective generations. Their music is carefully balanced between blazing virtuosity and sheer beauty.

Goran Ivanovic and Fareed Haque recorded two CDs together, Macedonian Blues and 7 Boats, to great critical acclaim, even getting the nod as top best acoustic guitar albums 2004 from acoustic guitar magazine. Both have both been so busy that they have not been able to play again together for years.

After a 20-year hiatus, virtuoso guitarists Goran Ivanovic and Fareed Haque have joined forces again! A year of intensive touring and composing has produced IndoBalkan, the duo’s debut release on Delmark Records. Featuring rising star percussionist Juan Pastor and incorporating elements of jazz, classical, Indian and Balkan music, the duo explore longer, more complex compositions and stunning technical challenges while retaining their love for beautiful melodies and sweet tones. Two of the most gifted guitarists performing today, their styles and backgrounds are vastly different but, as the Chicago Tribune wrote of them, “when their two guitars play, cultural barriers melt away.”
With IndoBalkan, Ivanovic & Haque are offering their audience a collaborative musical capstone. This multifaceted projects brings together the duo’s musical and geographical influences and showcases their virtuosity and creative lyricism.

Certain tunes like “Prorok” or “Detour Samba” showcase their ensemble and rhythmic sophistication while others like “Rhodes” and “Ikaria” are sensitive, lyrical, and introspective. Percussion widens the palette of the record, performed both on the guitars themselves, as in “Santorini”, as well as on other instruments. Fareed adds a spatial wash of cymbals to the title track “IndoBalkan” and up-and-coming percussioning Juan Pastor guests on “Jim Phelps”.

Over time, Ivanovic & Haque’s music and performance has evolved and matured, becoming more thoughtful and expressive, while retaining its natural athleticism. Their fresh musical language is propelled by strong rhythms, verging closely towards popular forms, meant to be felt and experienced, revealing an inner solidity. — Notes by Julia A. Miller

Fareed Haque is a modern guitar virtuoso. Steeped in classical and jazz traditions, his unique command of the guitar and different musical styles inspire his musical ventures with tradition and fearless innovation.

IN addition, Fareed has performed at the Chicago, Detroit, and Java Jazz festivals and was featured as part of the Made in Chicago Series performing with his numerous groups at Millenium Park’s Pritzker Pavillion in Chicago. He also performed and arranged numerous classical programs as 2013 artist-in-residence for The Chicago Latin Music Festival, was featured on WBEZ, as well as WFMT’s Fiesta! radio programs, and has recorded his arrangement of Piazzolla’s 5 Tango Sensations, El Alevin by Eduardo Angulo Leo Brouwer’s Quintet for Guitar and String Quartet with the critically acclaimed Kaia String Quartet. Haque continues to tour and record extensively along with documenting his unique teaching methods in a series of best selling interactive video courses through TrueFire.

IN 2016, Haque was invited to perform at the Indianapolis Jazz Festival Tribute to Wes Montgomery along with Peter Bernstein, Bobby Broom, Henry Johnson, Will Mathews, Russell Malone, Pat Martino, and Dave Stryker. He was also a visiting scholar at Western Michigan University. Recent projects include artistic directorship of numerous jazz festivals, performances with Tony Monaco, Paquito D’Rivera, Vijay Iyer, pundit Vikku Vinacrayam, long-anticipated reunion concerts with Garaj Mahal, concerts in India, a return to Java Jazz, and concerts and teaching in China. In 2017, Mr. Haque released The Bridge with virtuoso Chilean bassist Christian Galvez and renowned Indian percussionist Selva Ganesh. Haque has also rekindled his duo with Goran Ivanovic. Performances include Canadian Guitar Festival, Winters Jazz Fest NYC, Lotus Music Fest, and many others. Upcoming tours in China and Europe are slated for 2018. Haque has joined drum legend Billy Cobham as a member of his Crosswinds Ensemble featuring Haque on guitars, Randy Brecker on Trumpet, and Paul Hansen on sax and bassoon. Extensive touring and recording are slated for 2019. Haque’s most recent release NEW LATIN AMERICAN MUSIC FOR GUITAR AND STRING QUARTET was picked by Howard Reich of the Chicago Tribune as one of the top releases of 2018. In addition, the release was chosen as Downbeat Magazine Editor’s Pick in 2018. 2019 portends to be a busy year, as Haque has retired from 30 years at Northern Illinois University to accommodate extended tours with Cobham, Goran Ivanovic, and his own groups. Highlights to include The Montreux Jazz Festival with Cobham, and appearances with his own groups at The Bluenote Beijing, Louisville, and Minneapolis Guitar Festivals among others. New recordings with his own group and with Goran Ivanovic are scheduled for 2019, under the legendary Delmark Label.

Soon after his transfer to NU, Haque came to the attention of multi-instrumentalist Howard Levy and joined his latin-fusion group Chevere. Thru Levy, Haque was introduced to Paquito D’Rivera and began a long and fruitful relationship with the Cuban NEA Jazz Master. Numerous world tours and recordings including Manhattan Burn, Celebration, Havana Cafe, Tico Tico, Live at the MCG were to follow. Especially notable is the classic and award winning Reunion featuring Haque along with Arturo Sandoval, Danilo Perez, Giovanni Hidalgo, Mark Walker, and David Fink.

Thru D’Rivera, Haque was brought to the attention of Sting, who had just begun his record label Pangaea. Sting invited Haque to join the label and he released 2 critically acclaimed recordings, Voices Rising and Manresa. Haque toured briefly with Sting, including notable appearances at The Montreux Jazz Festival, as well as NBC’s Michelob Presents Sunday Night with David Sanborn, but his own career demands led Haque in other directions.

Haque has been featured on WTTW’s ArtBeat and Chicago Tonight, Ben Sidran’s New Visions, Michelob Presents Sunday Night with David Sanborn on NBC, his own Lonesome Pines special for PBS, and on BET cable jazz channel. Fareed has twice been selected as Talent Deserving Wider Recognition in Downbeat Magazine. In 1989, Haque also joined the faculty at Northern Illinois University as professor of jazz and classical guitar. He continues to teach at NIU to this day.

After a short stint at Warner Bros. recording Majestad (unreleased and featuring John Patitucci, Michael Landau, Russel Ferrante, Grazinha, Lenny Castro, and Carlos Vega!), Bruce Lundvall signed Haque to the legendary Bluenote Records. While at Bluenote, Haque recorded three albums as a leader: Sacred Addiction, Opaque, and Déjà vu. Haque toured and recorded extensively with other artists, including tours and 3 CDs with Javon Jackson: A Look within, For One Who Knows, and Good People. In addition, sideman credits include tours and recordings with Joe Henderson, Herbie Mann, Bob James, Richie Cole, Joey Calderazzo, Kahil El Zabar and the Ethnic Heritage Ensemble, and numerous Bluenote recordings for producer/arranger Bob Belden alongside Cassandra Wilson, Dianne Reeves, Joe Lovano, Paul Motian, and many others. Numerous classical recitals, as well as appearances with the Vermeer Quartet and many symphonies across the US and abroad, added to an incredible diversity of performances during this period.

Thru Belden, Haque was invited to join forces with Joe Zawinul as part of his Zawinul Syndicate. The group proved to be one of Joe’s best and most eclectic. Included were percussionist and vocalist Arto Tuncboyacian, drummer Paco Sery, bassist Mathew Garrison, along with Haque on Guitar and Electric Guitar. A year of extensive touring brought Haque closer to his Jazz/Rock roots.

In 2004, Fareed premiered his Lahara Double Concerto for Sitar/Guitar and Tabla with The Chicago Sinfonietta at Symphony Center in Chicago, under the baton of maestro Paul Freeman, featuring tabla virtuoso Ustad Zakir Hussain, to whom the work is dedicated.

In 2006, Fareed was commissioned to compose a classical guitar concerto for the Fulcrum Point Ensemble. His Gamelan Concerto was premiered in May of ’06 at The Harris theatre in Millenium Park.

After 10 years of over 2000 dates with Garaj Mahal, Haque’s interest in electronic music and the Moog Guitar spurred him to leave Garaj Mahal and form Fareed Haque’s MathGames, featuring bassist Alex Austin and drummer Greg Fundis.

Notable events during this time include Haque performing and assistant directing the first Jazz Festival en la Patagonia in Frutillar, Chile under his mentor and friend Paquito D’Rivera, and appearances with his own groups at Java Jazz, The Chicago Jazz Festival, The Twents Guitar Festival, The Indy Jazz Fest, Coleman Hawkins Jazz Fest, Jazz in June, The Lafayette and South Bend Jazz Festivals, Sophia Jazz Fest, Bulgaria and many others around the world. Haque also performed at both the Aranjuez and Villa-Lobos guitar concertos (in one concert!) with The Chicago Philharmonic, under the baton of Lucia Matos at Pick-Staiger Concert Hall.