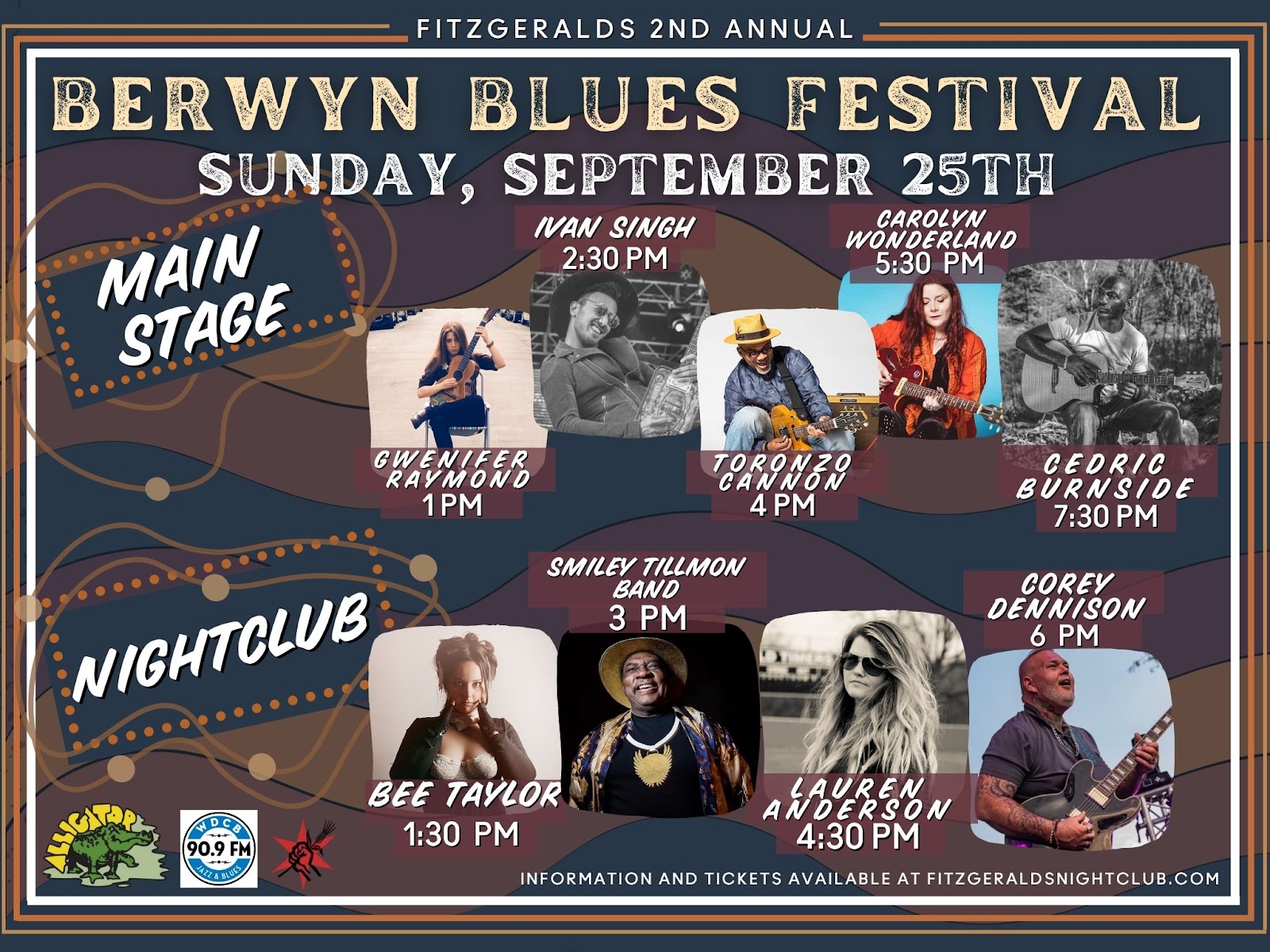 Formed in 2013, The Corey Dennison Band has become a favorite attraction at Chicago blues venues, including twice-weekly appearances at Kingston Mines. Led by Corey Dennison’s soulful voice and muscular guitar, the band released two albums for the legendary Delmark Records in 2016 and 2017 after honing 21 original songs night after night on the bandstand. Corey’s decade-long stint with Carl Weathersby and Gerry Hundt’s tenure with Nick Moss are evident but blend effortlessly into a dynamic new Chicago sound, anchored by Aaron Whittier and drummer Rick King. Critics and radio polls responded favorably as the albums garnered glowing reviews and constant worldwide airplay, netting chart positions on the Roots Music and Living Blues Radio Reports.   Nominations followed suit, with nods for Best Emerging Artist and Best Contemporary Blues Album from the Blues Music Awards, a pair from Blues Blast Magazine, and Grammy balloting. The strength of the band’s repertoire is matched only by the charisma of the stage show; it’s not uncommon to see Corey belting out the blues, unamplified, in the heart of the audience while the band steps in time to the groove. It’s not novelty for these musicians and entertainers, however, it’s exactly where they want to be.

Born in Chattanooga, Tennessee, Corey Dennison spent a majority of his childhood moving about Tennessee and Georgia. As a young boy, Corey heard the powerful, soulful sounds of the Blues on late night radio programs and recalls being captivated by the music. He received his first guitar at the age of 6 and began to imitate the music of artists such as Gatemouth Brown, Albert Collins and Albert King. Corey immediately felt a strong connection to Soul music. “I just loved the way Soul music made me feel from my head to my toes. I remember humming along to songs from Wilson Pickett, Curtis Mayfield & Sam Cooke.” This marked a lasting impression on his musical style and is clearly visible today in his soulful vocals and fiery guitar solos.  Corey found his musical calling while hanging out with his harp playing uncle. “My Uncle snuck me into clubs where I saw some of the greatest Blues cats of all-time, Albert King, Albert Collins and Junior Wells. This is where it became clear to me; I wanted to be a Blues Man.” He spent 12 years honing his skills as a sideman for Carl Weathersby, a mentor beyond the music: ” Pop has really showed me the real me and have helped me in a lot of ways. Showed me what to do, what not to do. I wouldn’t know anything if it was not for Carl and my brothers-in-arms.” Playing with Weathersby blessed Corey with opportunities to share the stage with such musical greats as The Kinsey Report, Robert Blaine, Chico Banks, The Steepwater Band, Jimmy Johnson, Robert Randolph, Derek Trucks And John Mayer, Gerry Hundt, Nick Moss, Lurrie Bell, Carlos Johnson and the Buddah of Bass, Mr. Bill Dickens, and Buddy Guy.

Gerry Hundt was playing Chicago Blues in taverns before he was allowed to drink in them. Born in Wisconsin and raised in Rockford, Illinois, Gerry has since lived in Vermont, New York City, Colorado, and Chicago.  In Denver, he worked, toured, and recorded with the likes of John-Alex Mason, Ronnie Shellist, The ClamDaddys, and Easy Bill.  From 2004 through 2009, Gerry toured the USA and EU relentlessly as a member of Chicago’s Nick Moss & The Flip-Tops, filling the role of “utility man,” playing bass, guitar, harmonica, and, of course, mandolin. On the strength of his critically-acclaimed Blue Bella Records CD, “Since Way Back,” Gerry was nominated for Blues Music Awards in 2008, 2009, 2010, & 2011 for Best Instrumentalist, Other (Mandolin), and featured at the Montreal Jazz Festival and The Blues Station in Tournon d’Agenais, France. In addition to continuing worldwide radio and web airplay, tracks from “Since Way Back” have appeared numerous times on NPR’s “Morning Edition.”  As a solo performer, Gerry’s fresh take on Chicago Blues has led to appearances at the Kalamazoo Blues Festival, Port Townsend Blues Festival, and Buddy Guy’s Legends; it has also made him a favorite among blues-dance aficionados at national events like bluesShout! and the Mile High Blues Fest. From 2007-2010, Gerry Hundt’s Legendary One-Man-Band appeared weekly for Tuesday Bluesday at Holt’s Coach Lite Inn (Chesterton, IN) – a gig which regularly saw touring blues musicians mingling with locals.  His favorite seasonal gig is the Saturday open-air market in Chesterton, where Gerry appears monthly, bringing the sounds of Chicago’s old Maxwell Street to Indiana.  In 2015, he captured that with the release of “Gerry Hundt’s Legendary One-Man-Band,” available here.  In band settings, Gerry has appeared with the finest Midwestern traditional blues acts, namely Mike Ledbetter, The Cash Box Kings, Barrelhouse Chuck, Billy Flynn, Little Frank, Joel Paterson, Rick Sherry, Joe Filisko, Bill Lupkin, Matt Hendricks, Jim Liban, Kenny Smith, Andrew Diehl, Perry Weber, and Westside Andy.  He also endorses Supro amplifiers.

Also from Rockford, Illinois, Aaron and CDB drummer emeritus Joel Baer cut their teeth as teenagers backing up Pistol Pete.  Aaron went on to graduate from Berklee School of Music.