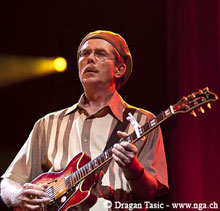 From sharing the Apollo Theater stage with Keith Richards, Eric Clapton, Billy Gibbons and others to backing Beyonce Knowles at Barack Obama’s Neighborhood Inaugural Ball and on her Grammy winning single from the movie Cadillac Records; from his prolific sideman work to his ten albums as a leader, Billy Flynn is a true-blue heir of Delmark’s storied legacy. Lonesome Highway features 16 new original songs and special guest vocalist Deitra Farr! Producer Dick Shurman says of the set, “It’s one of the great Chicago blues guitar albums.” Kim Wilson, who regularly calls Billy for sessions, observes that “Billy Flynn is one of the greatest blues guitarists alive and one of the greatest to ever live. He is truly the musician’s musician.”

Growing up up in Philadelphia, Johnny Iguana really zeroed in on Junior Wells and Otis Spann after becoming obsessed with Chicago blues at age 15. In his later teens, armed with a fake ID and a sport coat, he played countless all-night blues gigs at Philly bars— largely songs plucked off Junior’s records. A few years later, Johnny met Junior at a NY show and was thrilled when Junior hired him after live auditions in Boston and Rhode Island. Johnny packed his bags and spent three years touring and recording with Junior. Decades later, Johnny still calls Chicago home and has emerged as one of the premier blues piano players in the United States. Since his days with Junior, he has toured or recorded with a who’s who of Chicago blues greats: Otis Rush, Buddy Guy, Billy Boy Arnold, James Cotton, Lil’ Ed, Carey Bell, Eddy Clearwater, John Primer, Lurrie Bell, Billy Branch and more. He has learned from the best, a lifelong immersion and dedication.