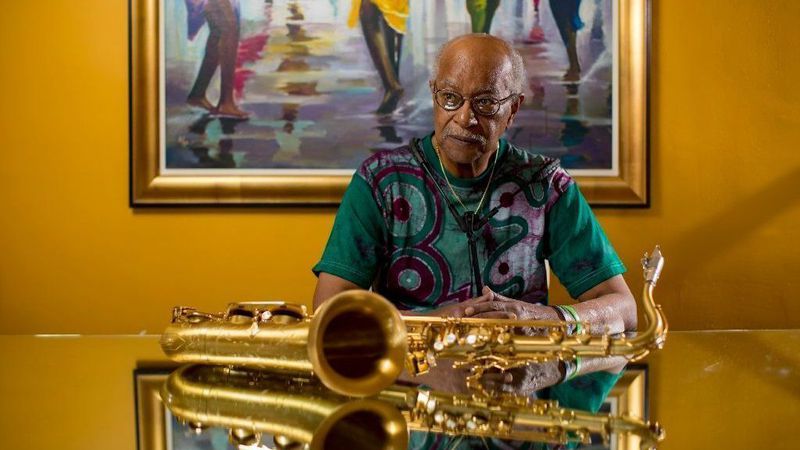 Chicagoan of the Year: Ari Brown nobly upholds the regal tradition of Chicago tenordom in jazz

He’s not a box-office star or a maker of hit recordings or a jazz celebrity (if there still is such a thing).

But in 2018, saxophonist Ari Brown nobly upheld – and deepened – the regal tradition of Chicago tenordom, an idiom admired around the world.

With past Chicago tenor giants such as Von Freeman and Fred Anderson no longer among us, Brown found himself a living symbol of this music. Through performances from Poland to Israel and in Chicago’s leading jazz rooms, Brown has unfurled a sound that’s big and beefy, steeped in blue and encompassing mainstream and experimental languages (in the manner of Freeman and Anderson).

It has taken Brown, a modest personality with a sizable musical gift, a great deal of time and struggle to reach this point.

When his father played jazz albums around the house during Brown’s childhood, “I didn’t like it at first,” says Brown. “But the more I listened to it, the more l liked it.”

His next great awakening occurred at Wilson Junior College, where came into the orbit of such future giants as Muhal Richard Abrams, Roscoe Mitchell, Henry Threadgill and Joseph Jarman.

“That kind of got me going as far as listening to music,” says Brown, whose ears and sensibilities were opening to the ideas of the emerging Association for the Advancement of Creative Musicians (founded in 1965).

“I went to the meetings, and the meetings were kid of intimidating to me. Because all these musicians, they were already made musicians. I was just a new face in the crowd.

“I got a chance to listen to Muhal,” adds Brown, referring to AACM co-founder Muhal Richard Abrams. “When I joined the group, Muhal wanted everyone to have a group and feature their own compositions and so forth. And I was really scared, because I hadn’t written a composition. I had never led a band before. So I’m not sure what I did. But I guess it worked.”

Indeed, Abrams and the AACM had coaxed Brown out of his shell, the saxophonist increasingly active in a variety of jazz, soul and blues bands.

But in 1974 he suffered an auto accident that knocked out his teeth, a disaster for a reed player.

“It was kind of rough for a while,” acknowledges Brown, who turned to the piano, his first instrument, while recuperating.

Once he was ready to start playing saxophone again, he endured another blow.

“Somebody stole my horn from my house, so I borrowed my father’s horn,” remembers Brown. “I played it one day – this was about seven months after the accident – I tried to play something, and I said: ‘Oh, wow, I can play some notes.’

“So every day, I tried to get more notes and more tone. Eventually it came out.”

By 1979, no less than Elvin Jones – one of the most virtuosic and explosive drummers of the second half of the 20th century – tapped Brown to tour with him, which Brown did periodically for the next 22 years.

Yet the saxophonist didn’t release his first album as a leader, “Ultimate Frontier” (Delmark Records), until the mid-1990s.

What took so long?

“I guess I never got around to it and never had enough confidence in myself to push it,” says Brown.

His subsequent recordings have underscored the plushness of his sound and intensity of his expression, Brown today standing as a reluctant star of Chicago jazz, but a star nonetheless. His resume proves it, including work with pianist McCoy Tyner, the Art Ensemble of Chicago, percussionist Kahil El’Zabar, saxophonists Pharoah Sanders and Archie Shepp, pianist Abrams, multi-instrumentalist Ira Sullivan, Orbert Davis’ Chicago Jazz Philharmonic and, of course, his own bands.

What is Brown most proud of during a long career that has included contributions to more than 75 albums?

“The fact that I’m still in it,” says Brown, who has mentored several generations of Chicago musicians at the University of Illinois at Chicago, Columbia College Chicago and elsewhere.

“I’m really still trying to play, I’m trying to improve, to push the buttons for the new music.”